Deputy Minister for Tourism, Arts and Culture, Mr. Mark Okraku Mantey, has pledged the government’s commitment to upgrade the Assin-Manso Reverential Garden into a state-of-the-art cultural heritage site to attract and retain local and international tourists.

The intervention formed part of a robust domestic tourism drive commenced by the Ministry, targeting one million Ghanaians to visit tourism sites around the Country annually to sustain the sector as a leading contributor to Gross Domestic Product ( GDP).

He said the government did not doubt the potential of the sector to engineer Ghana’s economic growth and job creation to transform the lives of citizens, hence, the Ministry’s focus on upgrading its existing tourist sites and developing new discoveries.

Mr. Mantey gave the reassurance in an address at the 23rd edition of the Emancipation Day celebration held on Sunday at Assin-Manso in the Assin South District of the Central Region.

The Emancipation Day celebration is an annual event observed to commemorate the resistance and liberation of African people in the Diaspora against enslavement and violation of their human rights.

The climax of the celebrations in Ghana is held on August 1, each year, with a grand durbar of Chiefs at Assin-Manso in the Assin South District to mark the abolition of chattel slavery in the British colonies in 1834 and others in the Americas and Caribean.

The Assin Manso community hosts the event at its Memorial Park and later participants mostly Africans from the Diaspora visit the Nnonkosuo (Slave River) where the slaves from the Northern parts of the Country were taken for their last bath before being sent to the Cape Coast and Elmina castles to be transported overseas.

The Town also has the slave market where slaves were sold, historical edifices, and the Reverential Garden hosting the tomb of three renowned African slaves including Carson and Crystal whose remains were transported overseas and were reinterred there, some two decades ago.

As part of the celebration, wreaths were laid on behalf of the Government and the people of Ghana, Traditional Rulers, the global African community, and the youth of Africa while mediation, reflection, and healing prayers were said at the riverside.

The celebration, which was under the Pan-African-Historical-Theatre-Festival’s (PANAFEST) theme: “Securing the African family: Our health, our wealth, our soul,” and Emancipation Day theme “Reclaiming our right to weave our narrative”, brought together Government officials, chiefs and Africans from the Diaspora.

However, the celebration was without the elaborated ceremonial display of culture and tradition due to the outbreak of the Coronavirus (COVID-19) pandemic. 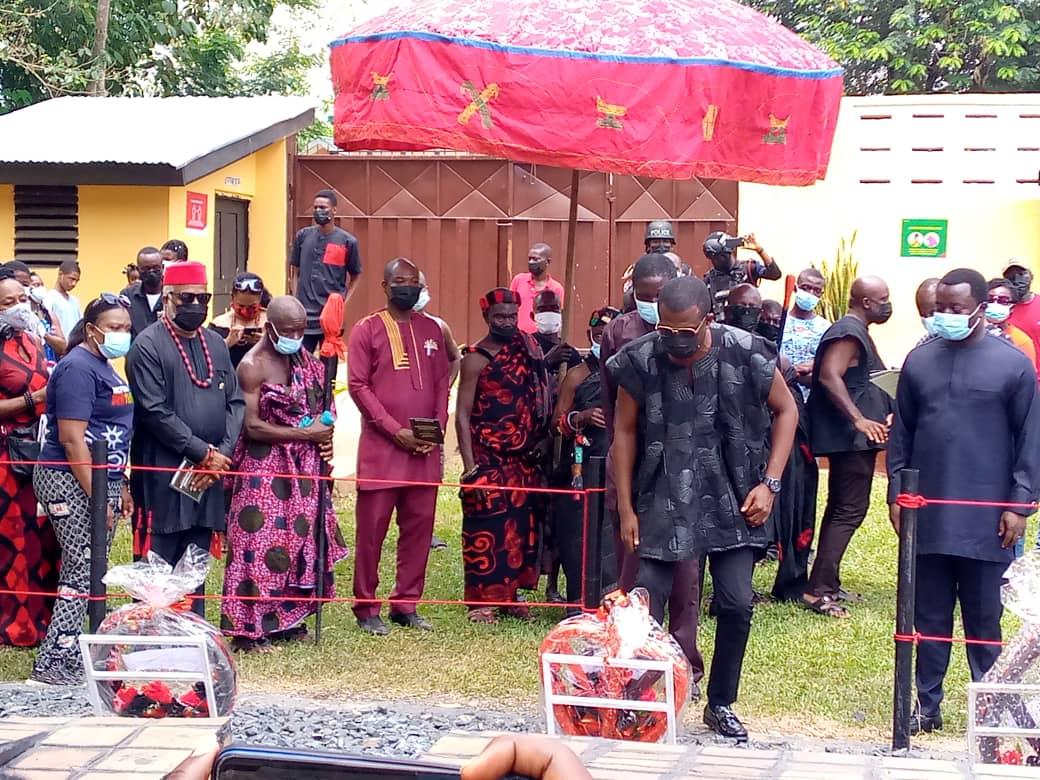 Also, the Deputy Minister announced that the government was working to train more industry players and Small and Medium Enterprises (SMEs) in the tourism sector to grow and sustain businesses.

Mrs. Justina Marigold Assan, Central Regional Minister also committed her support to the facility to give the Assin-Manso ceremonial grounds a befitting status.

She reiterated the need for all to join forces to liberate all Ghanaians particularly those in abject poverty and charged all to always stand for the truth, freedom, probity, and accountability.

In his welcoming address, Nana Dr. Ohemi Awere V, Omanhene of Assin-Apimanim Traditional Area remembered all gallant fallen heroes and heroines who died through the struggle for the liberation of the black race especially the inhuman act of the trans-Atlantic slave trade.

He praised the government’s commitment to upgrade the facility and called on all to support to maintain Ghana’s cultural heritage.

The Omanhene also thanked all for the annual visits and their strict adherence to COVID-19 protocols and urged the public not to lose their guard.

COCOBOD at 75 – Cocoa Day at Suhum

Ebola in Uganda: 5 confirmed dead and 19 more deaths under investigations

Aisha Huang & three others remanded for the third time

The Member of Parliament for Assin Central, Hon Kennedy Ohene Agyapong has appealed for peace among the various factions in the Bawku Municipality and environs

Aisha Huang & three others remanded for the third time

The Chinese national charged with illegal mining activities in Ghana, En Huang, popularly known as Aisha Huang, and three others have been remanded for the

The Member of Parliament for the Effutu Constituency, Alexander Afenyo-Markin has inaugurated three multi-purpose community centers at New Winneba, New Ateitu, and Bambrimto all in

The Vice-President, Dr. Mahamudu Bawumia, has inaugurated the 22 kilometers inner city roads project in Cape Coast in the Central Region, The project included the